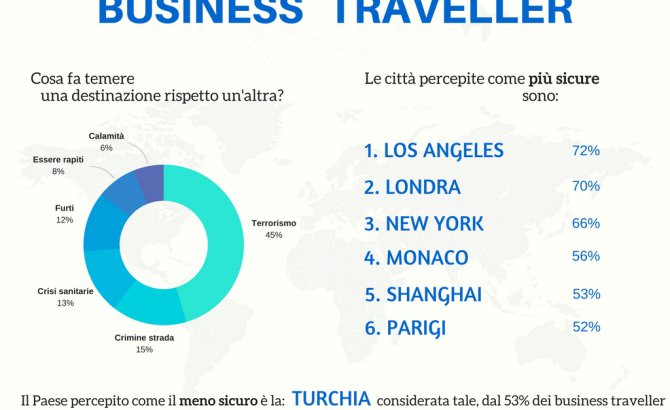 Where the Business traveller feel unsafe?

Discussing on what are the destinations for summer or winter l ’ l ’… leisure; but for the business travel?

To preserve that strength even in difficult times, companies need to be aware of the fears of those who travel, take steps to reduce risks and communicate programs and support services that reassure business traveller.

According to a new survey by Global Business Travel Association, on a sample business traveller (Americans), in questo momento storico a preoccupare i viaggiatori business sono:

Only the 37% of respondents claiming to feel secure as much domestically and abroad: the 52% claims to be more quiet If it doesn't come out from your country. According to this sample of business traveller ’ cities to be considered:

- "safe" are those North American cities and of theWestern Europe
- "pretty sure" other cities of “developed countries”
- "not good", or even "not secure", 7 of 10 emerging targets proposed by the survey.

For example, Los Angeles is considered "safe" from 72% of respondents, London from 70%, New York from 66%, Monaco from 56%, Shanghai from 53% and Paris from 52%. Proposed attractions (including Mexico, Brazil, Lagos, Jakarta, Mumbai and Kuala Lumpur), those considered less secure is the Turkey, declared "not safe" from 53% the business traveller.

Considered this survey, However, we can assume that the widespread perception is that in today's world no place is now really safe.

“When the MICE do you GREEN!”